The 2018 version. 3D library of cable-carrying systems via keys.

In 2018, the library of cable-carrying systems was radically redesigned for the IEK company. The family of cable-carrying trays was made through a system of manual selection of keys for pre-drawn trays. That is, the user first draws a system of trays with a given width and height and then selects a specific brand of the product for the trays selected with the mouse.

In the video you can clearly see how to work with the library, below there is also a description of the steps of creating a library. 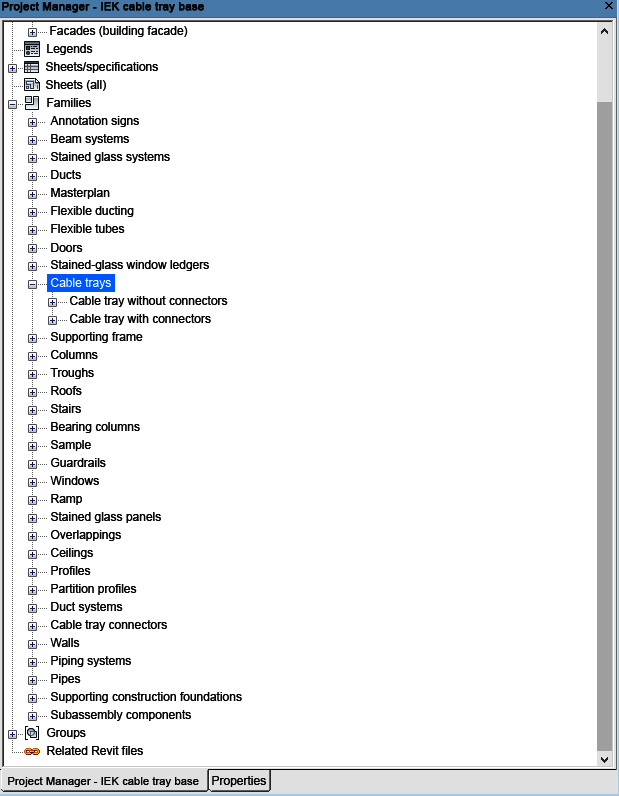 The first difference is a dimension, in particular, width of cable trays and cable raceways.

The list of works for the development of the database included the following stages:

1. Creating two Excel files, which are later exported to the *.RVT file. The files are simple without correspondences, what fits what

2. Creating smart 3D models of accessories that are not available in the standard Autodesk REVIT.

Advantages of such a library:

Disadvantages of such a library:

• Fully editable by anyone, even a novice user.

There was a variant of developing a library of cable trays using C# programming (C-sharp). So that the plugin is embedded in Autodesk REVIT versions 2016-2017-2018 and when you click on the button, you could select specific sizes not through an infinitely long list of keys, but automatically through a convenient window. 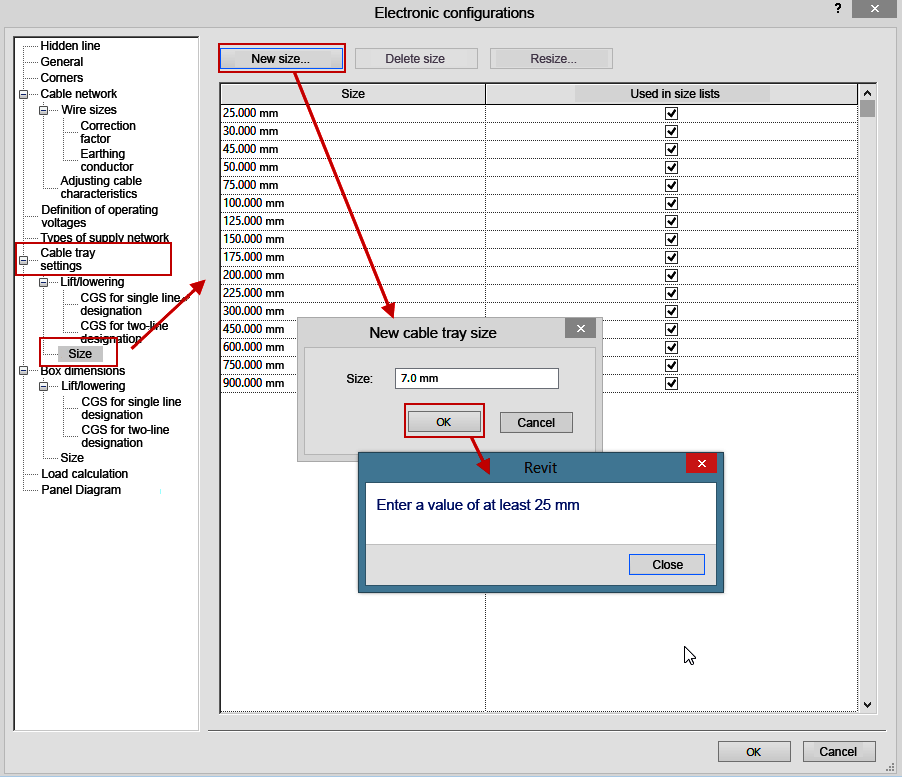 It is easy to add new Articles to the rendered Excel file. The Excel file will be located in Program Files. It can be transferred to users separately so that they can replace the old one with a new one

When a new version of Autodesk REVIT is released, you need to redo the installer

When introducing new types of equipment that logically do not fit into the algorithm of the program, it is necessary to redo the program code

There may be problems with installation if a person does not have access rights at work to install programs.

The option of creating a library using programming was assigned to the next stage of work due to the fact that the library needed to be done as soon as possible.

At the request of IEK Holding, InfoSAPR employees have developed 3D models of cable-carrying systems (trays) and plastic cable channels. In the course of the project, a total of about 2000 items and 3D models of equipment of the IEC Holding company were created.

Despite the fact that these sections of equipment may seem the same, but for REVIT there are significant differences between cable-carrying systems, that is, trays, and plastic cable channels. 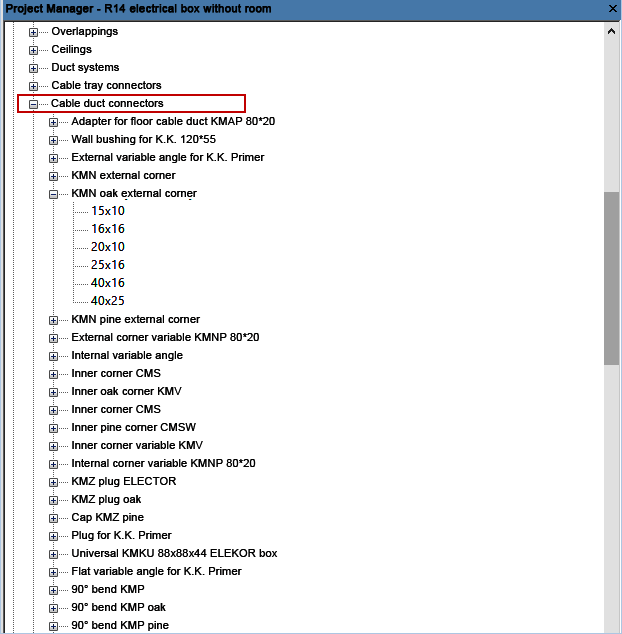 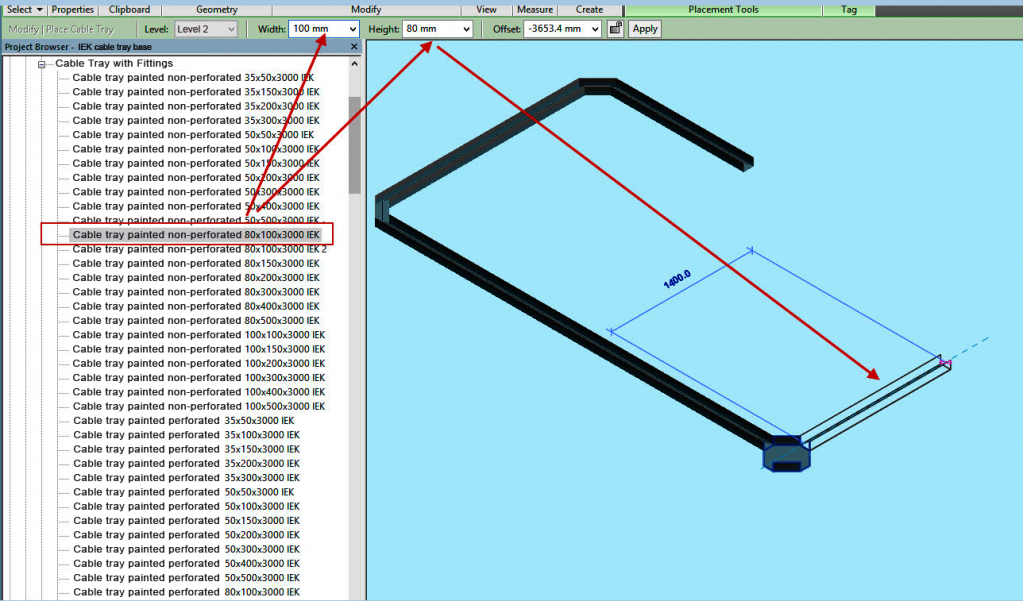 System families cannot be loaded into templates and projects, but standard sizes from system families can be transferred or moved by copying/pasting from one project or template to another.

Therefore, a family of cable channels had to be created in the section Electrical Equipment and Connecting parts of boxes.

Another feature of the REVIT “Cable Trays” system family is that, by definition, it does NOT store dimensions inside itself, namely the width, height and length of the tray, so each time you have to set these dimensions before drawing a cable tray, guided by the dimensions from the name.

Database of cable trays and cables in Autodesk REVIT

Unfortunately, it is not possible to set two horizontal rotations to one tray, for example, by 90 and 45 degrees. Therefore, during the design, some turns must either be inserted manually or go into the properties of the tray and reconnect the connecting parts.

But on the other hand, there is also a disadvantage – in the "Electrical Equipment" family, it is impossible to set the connecting parts (turns and adapters) so that they are inserted into the track automatically during drawing. 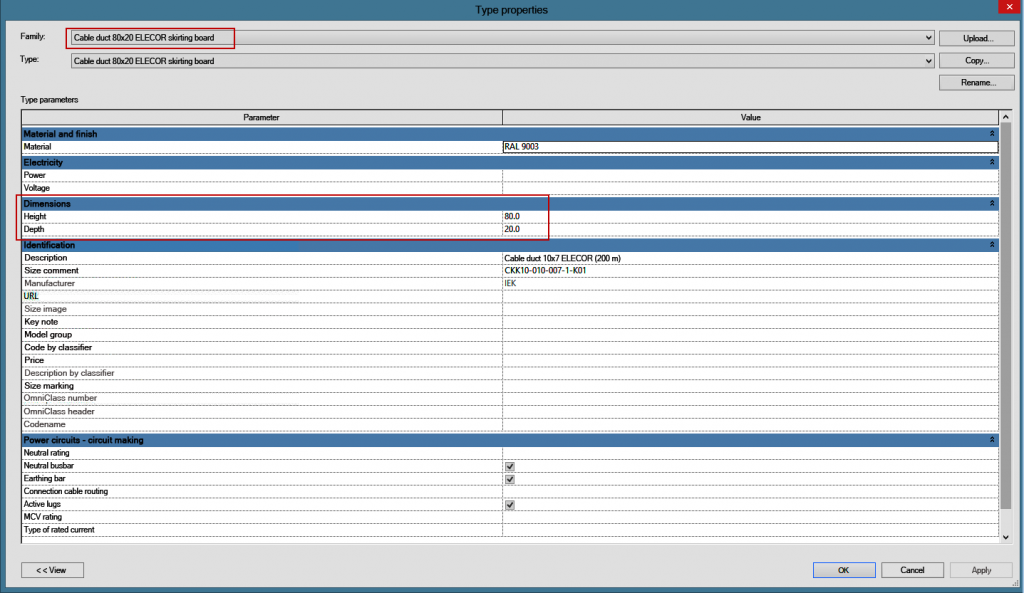